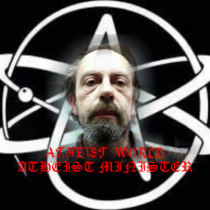 Active 4 years, 4 months ago
I have moved up in my life. My people wanted me to become a Atheist Minister. Now I am a Atheist Minster. View